A Band of Sisters

Background to the project

Having interviewed hundreds of veterans over the years, one subject kept coming up time and again – military personnel survive and thrive on the support they receive from their families. With increasing media coverage of military PTSD and the significant coverage of the Invictus and Paralympic games, we felt it was time to talk to the wider families – the parents and partners, husbands and wives, sons and daughters who support their military loved ones.

Teaming up with Help for Heroes’ Band of Sisters, their member shared their own stories in often heartbreaking detail as they revealed what happened to their loved ones and how they are still living with the consequences today.

Click on the image to meet some of the sisters

"Every tragedy has a gift with it but sometimes, it's really difficult when I see him and he's in such pain and I think where's the gift?"

Post-traumatic stress disorder (PTSD) is an anxiety disorder caused by very stressful, frightening or distressing events. For many years called ‘shellshock’ within military circles it is today recognised as a medical condition which has significant impact on the health and wellbeing of the person suffering and of those around them.

The people who took part candidly shared their stories of proud members of the armed forces who are living with unforeseen consequences of serving their country. We are hugely grateful to them, as we are to the National Lottery Heritage Fund and the Armed forces Covenant Fund Trust who have generously supported this project.

The Band of Sisters

The Help for Heroes’ Band of Sisters is a membership network open to the close supporting family members of veterans, service personnel and those who have served alongside our armed forces who have been wounded, injured or sick during, or as a result of, their service and resulting in an ongoing need for support.

Offering advice and support both practical and emotional they care for the carers, organising get-togethers as well as respite weekends at their unique facilities. Phoenix House at Catterick Garrison offers families a place to relax, have fun and just be, with a sisterhood where shared experiences and genuine understanding make a huge difference to military families. With the Legasee recordings of current ‘sisters’ we hope that more people will reach out for the support available to them.

"Help for Heroes have been really delighted to work with the highly experienced team at Legasee, in developing a great project that will, finally, recognise and record the contribution of military families and the sacrifices they have made over the years"

Our exhibition highlighted a cross-section of the people we spoke to as we gathered the stories of parents, partners and children – the men and women who support those injured as a result of their military service.

Officially launched in April 2020 at Phoenix House at Catterick Garrison, the exhibition will soon begun a tour of the UK which takes in other Help for Heroes’ recovery centres, libraries and public events. Our first mobile exhibition is giving tens of thousands of people the chance to engage with the work Legasee and the Band of Sisters do and see for themselves the difference it makes.

Click on the image to meet some of the sisters

"Thank you for bringing such an excellent display, it was generating interest from the moment it went up. It resonates so much with people in the area especially those with military connections."

As we planned this project, we learned from the library service how few books they had to support children who are living with parents physically or emotionally changed from their service careers, or who were moving schools and leaving friends because of military postings. We decided to fill this gap by producing a series of books for younger children which directly tackle these subjects.

"Ollie’s got a problem and it just won’t go away, And ever since he’s had it, he’s been feeling kind of grey..."

Working with Le Catteau Primary School and children’s author Amy Brannan we ran workshops to devise plot and characters, directly addressing the needs of young children and involving them closely in the development of the books. The end product will be three children’s stories which encourage open conversation around a family’s specific experiences and support children to engage positively with their own circumstances.

MEET THE VETERANS FROM THIS PROJECT

Craig is a former RAF Avionics Engineer who cares for his wife Michelle – a former RAF Communications Officer. Michelle was injured whilst serving in Iraq and Craig cares for her with the suppor...

Dorothy Kelton’s daughter Anna transferred from the Royal Marines Band Service to become a logistician within the Royal Navy. An accident during training left her with physical injuries leading to a

At the age of 24, Fiona Hossell’s son Glen was a Lance Corporal in the Royal Engineers and training with the Rhine Army Parachute Association. A gust of wind caught him during a jump and blew hi...

Heather Lake’s husband served with the Royal Logistics Corps as a chef. He was diagnosed with PTSD after two tours of Northern Ireland and one in Bosnia where a he sustained physical injuries too. H

Jenni’s Partner Dan served in the army as a Royal Engineer in Bosnia and Iraq before working in Afghanistan in a civilian role. He would later be diagnosed with complex PTSD and struggle to access t

Joanne is petitioning for a National Memorial for Armed Forces Personnel who die as a result of their service. She says, "Currently, only in-service deaths are automatically recorded on the Armed Forc... 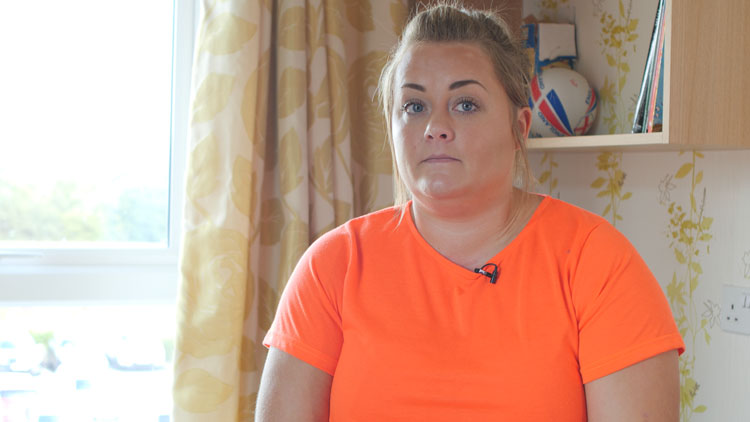 Kirsty Green has been with her partner Glen, a Royal Engineer, for 8 years. Glen had an accident whilst parachuting and damaged his spinal cord. Kirsty travels from her home in Stranraer to Catterick ...

Lisa Kirkpatrick’s husband Gary had an accident on an army training exercise. Engaged at the time and with a new baby, Lisa struggled to cope and Gary’s mental health was suffering. Watch as L

Lorna Hunter is married to Thomas who served with the regular and Territorial Armies. Suffering with PTSD led to a huge strain on their marriage, unemployment and a break-up. But neither of them could...

Louise Reynolds’ husband Kristian served in Iraq where he was injured and also had to deal with significant injuries of his colleagues. Struggling with PTSD he eventually sought help and was dec...

PLEASE TAKE A MOMENT TO CONSIDER THIS

Legasee is one of the first consolidated attempts to document the war-time experiences of men and women who have served their country.  While remembrance ceremonies and battle anniversaries are regularly reported on TV,  this coverage rarely focuses on veterans’ personal experiences for more than a few seconds and is of limited value as an educational tool or a record of individual achievement. Legasee aims to cover military life in much more depth by focusing on personal stories and viewpoints. If you think this work is important, please consider a donation. PLEASE DONATE NOW